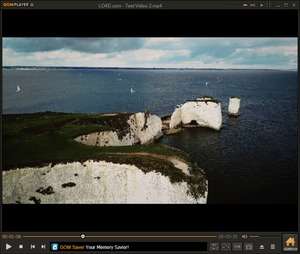 A review of GOM Player by Felix Cheng

If you're sick of mucking about with required codec packs and missing decoders, then GOM Player might just become your favourite all-in-one media player. Unlike other players for Windows which require you to install additional codecs, GOM Player comes fully packed from the get-go.

One cool feature which might make frequent downloaders happy is the fact that GOM Player can actually playback files which haven't completed downloading yet, that is if you have a file which is just taking too long to retrieve, you can play it back to test out the quality and content before actually completing your download. The player can also perform real-time index rebuilding of AVI files.

The most popular video formats can be played with this video player and of course, you can certainly expect to be able to view the following: AVI, DivX, Apple Quicktime MOV files, FLV (Flash Videos from YouTube), AC3, WMV, ASF and newer and higher definition files like h263 and MP4.

As you would expect from such a popular program, GOM Player also sports a playlist which pops out, though the functionality and sorting functions of this feature are unfortunately lacking.

Overall, if you are looking for a versatile video player without having to fumble around with codec packs and/or you've just installed a new version of Windows and want to get started watching movies right away, you might just be satisfied with GOM Player.

This download is licensed as freeware for the Windows (32-bit and 64-bit) operating system on a laptop or desktop PC from video players without restrictions. GOM Player 2.3.52.5316 is available to all software users as a free download for Windows 10 PCs but also without a hitch on Windows 7 and Windows 8.

Compatibility with this video player software may vary, but will generally run fine under Microsoft Windows 10, Windows 8, Windows 8.1, Windows 7, Windows Vista and Windows XP on either a 32-bit or 64-bit setup. A separate x64 version of GOM Player may be available from Gretech.

Ranking in
Video Player Software
#6 of 59